We arrived at Charles de Gaulle airport at 8:20 Paris time, an 8-hour flight from Chicago on a packed Delta jet. Although the flight attendants had their hands full, one of them took the time to relay the score of the Packers game to us.

"It was a blowout," she added, an assessment that Andy later took issue with.

After waiting in a long, snakes line to have our passports stamped, we purchased tickets to the central area of Paris. The vending machine didn't accept our credit cards -- should have upgraded to ones that have a smart chip embedded in them -- so we found a change machine. We did have the foresight to purchase euros before leaving on our trip.

Once we reached our stop, we ascended a series of five, maybe six escalators. I lost count. The apartment we're renting is just a short walk from the train station, though it didn't necessarily feel that way pulling suitcases that weigh an average of 40 pounds on a few hours of restless, barely reviving sleep.

Since we can't check into our apartment until noon, we're sitting, very comfortably, at a sidewalk cafe, drinking coffee -- Cokes for Andy and Eddie -- and watching a parade of people walk by.

And here we are. A view from our living room. 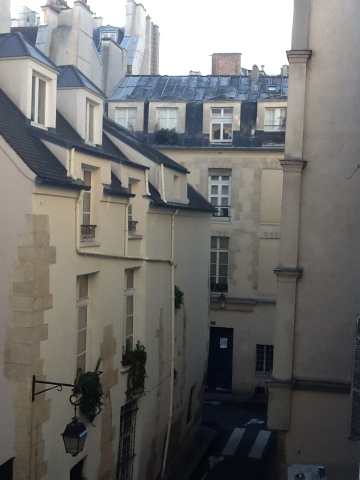