In some cases, new ordinance would allow police to see what books, DVDs (primarily), music, and games people are stealing from libraries 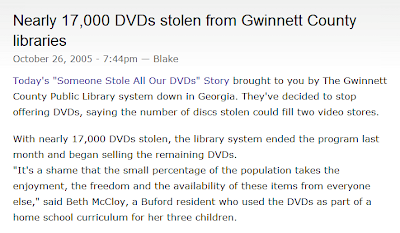 How many of these DVDs ended up in a secondhand store or on eBay?  (As opposed to the thieves' home libraries.)

Read more: http://host.madison.com/ct/#ixzz1YDYoVwew
Excerpt: Have some books or movies you want to get rid of? Under a proposed Madison city ordinance, if you sell them to a secondhand store your personal information and a photo will be entered into a police database. And that has raised concerns from local business owners and civil rights advocates.

The proposal is designed to catch addicts and crooks who go to secondhand stores and pawn shops to unload stolen goods like computers, TVs, iPods and other commonly pilfered items for cash. But a provision in the proposal, which passed the city Public Safety Review Committee on Wednesday on a 4-1 vote, also contains language that would include books, CDs, movies and other media. The ordinance could be considered by the City Council as soon as Tuesday.

It would require a photo and other personal information about anyone who sold an item to a business to be included in the database, allowing police to see what books people read, what movies they watch, what music they listen to and what computer games they play.  [Emphasis added.]

That would be in a perfect world.
Posted by Retiring Guy at 7:38 AM