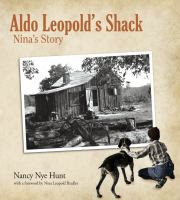 Excerpt:   In mid-July, "Aldo Leopold's Shack: Nina's Story" became available at bookstores. Nye Hunt's work is a children's book focusing on the Leopold family's restoration of a deserted Wisconsin farm in the 1930s and the 1940s. She tells the story from Bradley's point of view.

"What I learned was writing is real hard work," Nye Hunt said. "I spent a lot of time trying to find the right words to convey the mood. The real challenge was to show how Aldo Leopold's family came to the shack and made it livable."

Nye Hunt said the structure of the book followed the seasons, which allowed her to compress the family activities within a certain time period.

"I really enjoyed doing the research for the book and working with Trish," Nye Hunt said. "Since this is my first book and I never been through this process before, I really enjoyed the collaboration."

Nye Hunt said she kept teachers in mind while writing the book.

"I am certified to teach grades 6 through 12, but this book is aimed at those students in first through sixth grades, especially those in fourth grade who are studying Wisconsin history," she said. "I can see some teachers using the book as part of their lesson plan and also using some of the Leopold recipes in the book to show students what life was like back in Nina's time."

Nye Hunt said she and Bradley worked closely on the book.

She said the book is composed of a letter to readers from Bradley and a story which describes the family finding and improving the shack.

Also featured in the book are family recipes, family Spanish songs and translations and maps of the property and surrounding areas.

The most interesting thing about this book is its completely fresh perspective: Hunt completely collaborated with Nina Leopold Bradley and had unprecedented use to Leopold family resources that were not previously available for academic use. This is a well-written book that will appeal to both children and to those who appreciate Aldo Leopold's concept of the land ethic and stewardship.