But then we know how selectively state legislators have been listening to their constituents lately. 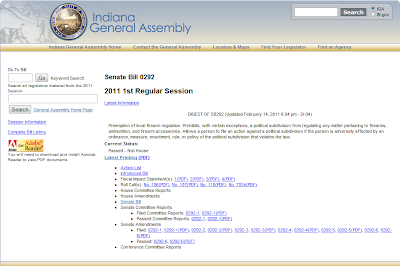 Excerpt: Imagine you are enjoying a spring day at the park with your kids and suddenly you hear gunfire yards away. You quickly grab your family and find cover only to realize the noise is coming from someone firing a gun for target practice in the same serene green space. Terrified, you call 911 to report the incident. Your trauma turns to outrage when you learn that it's no longer against the law in Indiana to shoot a gun at a city park. Worse, the police can't do anything about it.

If Senate Bill 292 passes, this scenario will be a reality facing police, city and town officials, as well as Hoosier families. This bill is a threat to public safety and attempts to repeal existing laws that are on the books in most cities and towns in Indiana. These laws prohibit the discharge of firearms either inside a city's boundaries or at specific locations, such as parks, town halls or libraries.

The NRA heartily approves, of course.  In fact, they can't get enough of this type of legislation.
Posted by Retiring Guy at 9:54 AM