It's 11 P.M. in Hiawatha, Iowa; Do You Know What Windows Your J-D Kids are Breaking? 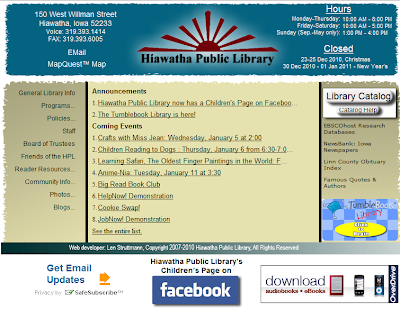 Excerpt: Struttmann said the vandalism happened sometime between 8 p.m. Wednesday and 4:30 p.m. Thursday, when the library at 150 W. Willman St. was closed for Christmas. She discovered the damage when she went to the library to remove books and materials left in its drop-off box.

“As we were leaving I noticed there was a big draft,” she said.

A single pane, four feet by two-and-a-half feet, was shattered on the building’s north wall. Because there was nothing inside the window except broken glass, police think the window was broken by a bat or similar object, rather than a thrown object, Struttmann said.

The window is boarded up pending the arrival of a replacement pane. Struttmann said the glass is specific to libraries, designed to filter direct sunlight to prevent damage to paper.

A replacement window will cost about $300, Struttmann said.

Struttmann said the library was last hit by vandals New Year’s Eve 2007, windows on its south side were broken.
Posted by Retiring Guy at 11:53 PM