Kenosha Chrysler Plant Closing: The End of the Car-Making Era in Wisconsin Manufacturing 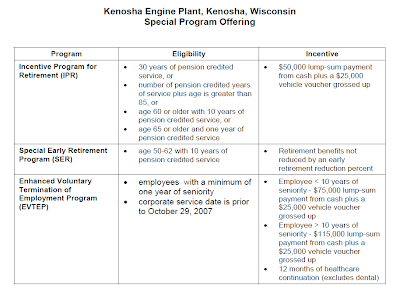 Excerpt: The last engine produced at the Chrysler plant in Kenosha is due to roll off the line Friday, taking with it the last remnant of big-time automaking in Wisconsin - and leaving behind many unanswered questions about the future of the once-bustling facility.

In its heyday as an American Motors Corp. plant in the 1960s, the site employed some 14,000 people. Most of the more than 500 who remain today will either retire or take jobs at other Chrysler facilities, primarily in Illinois and Michigan.

"It's really sort of the end of an era, and that's a sad thing," said U.S. Rep. Paul Ryan (R-Janesville), whose district has lost two Delphi facilities, the General Motors assembly plant in Janesville and now the Chrysler engine plant since 2008.

"We were really proud of what we produced from these communities," Ryan said. "These were multiple generations that took pride in their work producing autos for the world."

Coupled with a long-shuttered AMC plant in Milwaukee that once employed 10,000, the Kenosha automaking facilities provided family-supporting jobs and symbolized the region's manufacturing might.

"It was a huge economic presence in southeast Wisconsin for many, many years," said John Drew, regional representative for the United Auto Workers union who was employed at the Kenosha plant for 30 years.