...we love our cell phones. 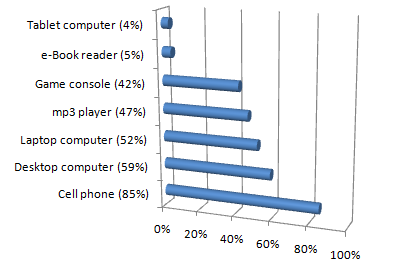 Excerpt:   Tablet computers and e-book readers -- Compared with the other devices on this list, e-book readers (such as the Kindle) and tablet computers (such as the iPad) are relatively new arrivals to the consumer technology scene and are owned by a relatively modest number of Americans. However, these devices are proving popular with traditional early adopter groups such as the affluent and highly educated -- ownership rates for tablets and e-book readers among college graduates and those earning $75,000 or more per year are roughly double the national average.