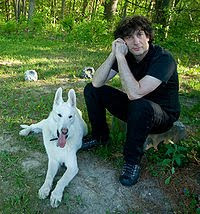 Excerpt: "When roughly 1,000 tweets are logged, we'll edit the contributions and compile a script, then head into the studio to record and produce the audiobook. The final audiobook will be downloadable free on our Web site and also available as a digital download at iTunes and other audiobook retailers," the BBC Audiobooks America Blog says.

Given that Gaiman has 1.2 million followers, I suspect it shouldn't take long to get 1,000 contributions.

It's not clear where this idea came from, but Gaiman has a history of using the Internet in interesting ways. He came up with the idea of raising money for causes by auctioning off the names of characters in upcoming books on eBay, and organized such an auction with other writers in 2005.
Posted by Retiring Guy at 7:28 AM