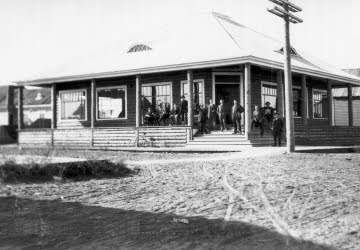 Excerpt: From the moment Episcopal missionary Hudson Stuck stepped off the sternwheeler that brought him to Fairbanks, he was determined to bring some elements of civility to the rough mining camp that was booming on the banks of the Chena. “The rascality of Alaska has flocked here,” he complained in a 1904 letter. “The whole of Front Street is given over to saloons.”

A public library, he believed, was the thing that was needed. It would give men an alternative to the “vice and dissipation of all sorts,” the dance halls and gambling dens that ran night and day in a town that had grown in two years from a single trading post to a population of 4,000 souls. Five years later, on Aug. 5, 1909, Stuck found himself as a featured speaker at the dedication of an elegant 40-by-40-foot log building that would serve as a center of Fairbanks community life for the next seven decades.

Library service has been provided to Fairbanks area residents at the Noel Wien Library since 1977.