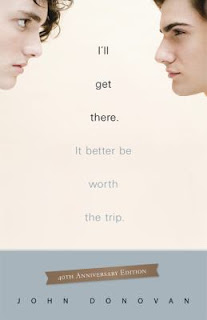 Excerpt: Flux, an imprint of Woodbury-based Llewellyn Publications, is publishing a 40th anniversary edition of "I'll Get There. It Better Be Worth the Trip" by the late John Donovan. Known as America's first gay teen novel, it's the story of a 13-year-old who lives with his estranged, alcoholic mother in New York and finds himself out of place in his surroundings until he meets a classmate with whom his relationship escalates.

Scheduled to be published in September, this edition features essays by writers Brent Hartinger and Martin Wilson, and Kathleen T. Horning, director of the Cooperative Children's Book Center, who reflect on the novel's place in history.

Donovan was a children's author and executive director of the Children's Book Council from 1967 until his death in 1992. His estate is donating royalties from the Flux edition to the New York Public Library. Odell sells second book to Random House.
Posted by Retiring Guy at 9:59 AM

Thank you for linking to my review! Have you had a chance to read the book? It's pretty good.