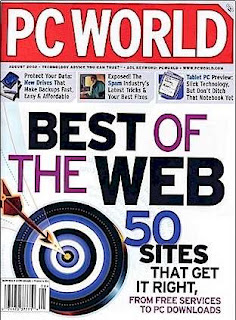 I've organized the sites in the list by the type of task they help you with. It is not a ranking; in each category I recommend sites that specialize in a different area than the others. I've also mixed in a smattering of sites that you might not use every day, but that provide ready answers to specific questions like "How can I learn to rumba?" or "Who should I vote for?" or "How do I make a wallet out of duct tape?"
Posted by Retiring Guy at 1:59 PM No comments: 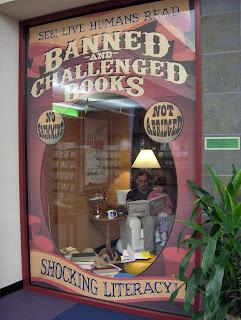 The Twin Hickory Area Library of the Henrico County Library, located in Glen Allen, Virginia, is celebrating Banned Book Week (September 27 through October 4) by having volunteers read banned and challenged books in a special Banned Book Reading Room, furnished with a chair, ottoman, lamp, and a selection of books.
Posted by Retiring Guy at 5:02 PM No comments:

Excerpt:
While many state employees will escape layoffs, some will see smaller paychecks because their hours are being cut. Officials at Georgia’s transportation department and in the New Hampshire judicial system are considering forcing staff to take unpaid furloughs, while furloughs have already been announced at the Illinois secretary of state’s office, the comptroller’s office, and at Georgia’s Department of Family and Children’s Services. Last month Georgia Department of Insurance and Fire Safety employees began taking one day off each month.
Posted by Retiring Guy at 7:10 AM No comments:

Outside of the Beatles, what group charted 4 Top Ten albums in one year?

Additional information found here.
Posted by Retiring Guy at 6:50 AM No comments:

And in a Related Matter

Link to September 25 Collision Detection post, "Poll: Young people who use landlines are more conservative than those who use mobile phones".
Posted by Retiring Guy at 11:15 AM No comments: 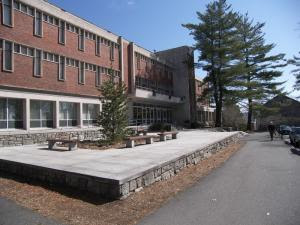 Excerpt:
Peter Schilling — the director of information technology at Amherst College — crunched the numbers on the technological habits of this year’s incoming class, and discovered some fascinating stuff. He’s published it online as the "IT Index", crafted in the style of a Harper’s Index, and it’s an intriguing snapshot of some of the technologically-driven behavioral changes that will mark the next generation.
Posted by Retiring Guy at 10:59 AM No comments:

"Little Library That Could"

Architect's sketch of the building that will be the new Butler Public Library.

By May, the Friends had amassed, through a combination of cash and in-kind donations, $635,000 of the $650,000 needed for the building project and construction began. The group is hoping to raise the remaining cash by having people buy carpeting tiles at $15 a square for the library.

The new facility at 12808 W. Hampton Ave. is expected to open in December.

“It’s been nine years in the making. We were hoping it wouldn’t take that long, but we were absolutely determined that it was going to happen,” Schultz said.

The 6,000-square-foot facility will be four times the size of the existing cramped library housed in a room at Village Hall, 12621 W. Hampton.

Posted by Retiring Guy at 9:54 AM No comments: