"Margarine Wars": Coming Soon to a Theater Near You

Excerpt:  This week in Michigan, a filmmaker named David Rich is in post-production on “Margarine Wars,” a fictional comedy set in 1967 Wisconsin, when the long-running battle over margarine was reaching a climax.

Rich, 59, is originally from New York state and moved to Arizona for health reasons, he told me when we spoke by phone this week.

It was in a doctor’s waiting room in Arizona, Rich said, that he struck up a conversation with a couple who said they were from Wisconsin. Rich told them he did some acting and stand-up comedy and was thinking of trying to make a film.

The couple suggested he do a film on the time in Wisconsin when oleomargarine was illegal and smuggled across state lines.

Rich was stunned. “Margarine was illegal?”

The couple assured him it was. 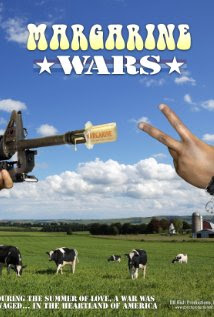 From Internet Movie Database:  60's Psychedelic Counterculture clash during the "Summer of Love," when an aspiring hippie Afro-Jew from New York dupes the son of a Swedish dairy farmer into smuggling illegal margarine into butter rich Wisconsin.