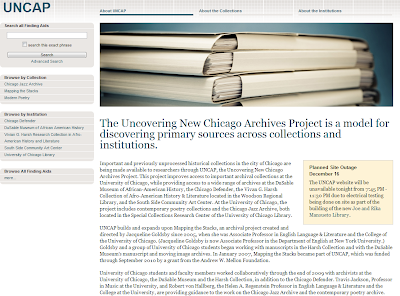 Excerpt: When Jacqueline Goldsby was preparing to write a book on the literary scene in black Chicago, she knew archives likely existed somewhere in the city. Tracking down sources, she discovered collections sitting in institutional storage rooms, still unpacked, and others gathering dust in family basements and attics.

She began knocking on doors around the city, asking various institutions if they needed help preserving archives. One, the Chicago Defender, steered Goldsby to an un-air-conditioned warehouse on Ogden Avenue, where she was stunned by what she found: correspondence between Defender editor John Sengstacke and President Harry S. Truman about desegregating the Army; photographs of Booker T. Washington with his family; about 100 home movies of the Sengstackes that depicted an elite black family during the 1940s.

"I'm getting goose bumps all over again when I think about it," said Goldsby, who launched the project five years ago while on staff at the University of Chicago. She is now an associate professor in the English Department at New York University.