Richard Spanbauer (R-Oshkosh) on 'Phony Baloneys' and Other Madison Delicacies* 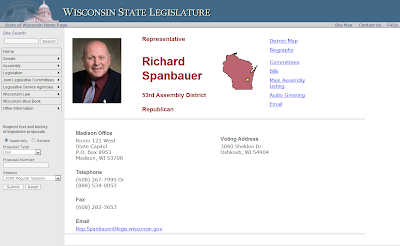 He's not crazy about what he sees.

The division between Democrats and Republicans has never been more delineated. Since being elected to the Wisconsin State Assembly as a Republican in 2008, the long-time politician who has been involved in town government in Omro and Algoma for the last 35 years got an eyeful of the "arm twisting," as he calls it, that goes on in the state's capital.

"Thirty or 40 years ago Republicans and Democrats worked together better. Now, it's 'You stay on your side and I'll stay on mine,'" Spanbauer said.

Spanbauer was re-elected in November. He ran unopposed.

He laments the status quo and vows to work all the harder in his second term to fight it.

"It hurts the consumer. If we could change that a lot more would get done," he said. "It's lobby city. You see a lot of phony baloneys down there."

He sees plenty of people eschewing good bills because to support them would defy party politics. That is not the way Spanbauer wants to go.

"I'm not for hire and I'm not trying to be a rebel. I consider myself a simple blue collar guy. I have a better sense of common sense," he said.


Spanbauer was endorsed by the Wisconsin League of Conservation Voters.

(How is Spanbauer on library issues?)
Posted by Retiring Guy at 7:45 AM