GET ME REWRITE: Donald Trump has a new crush

Trump had nothing but adulation for Rep. Janel Brandtjen (R-Menomonee Falls), who has begun her own investigation as head of the Assembly’s elections committee. Yesterday the committee held a hearing with only one person speaking — Kent Mansfield, by invitation only — to do what amounted to an infomercial of his company Authentix and give the members of the committee “goodies,” as Brandtjen described them, to play with that he explained would add layers of security to Wisconsin ballots if the state purchased Authentix services.

Test it out for yourself!

The Menomonee Falls Republican last week sent subpoenas to leaders of Brown and Milwaukee counties seeking ballots from the Nov. 3 election and the machines used to cast them, among other materials as part of an effort to review the election outcome, which as repeatedly upheld by state and federal judges in lawsuits brought by supporters of former President Donald Trump.

The subpoenas issued by Brandtjen were nearly identical to a letter issued last month by a Republican lawmaker in Pennsylvania.

8/11/2021 update, " Eyes of Wisconsin should be on the batshit crazy behavior of Janet Brandtjen", starts here.

Brandtjen is not apprehensive about starting her own competing investigation alongside the Vos investigation.

Vos however, questions the need for Brandtjen to start her own investigation.

8/7/2021 update, "The batshit crazy behavior of Janel Brandtjen:  the list goes on and on, starts here. 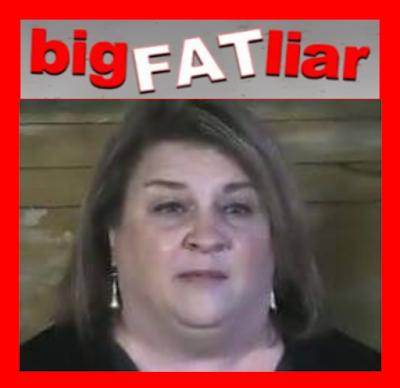 “Legislators have been hearing from thousands of disgruntled constituents regarding their concerns with the November 2020 election,” Brandtjen said in a statement. “From outside money pouring into Democrat-controlled communities, to individuals engaging in questionable activities; from improper guidance given to clerks from the Wisconsin Elections Commission, to clerks illegally prompting voters to declare themselves ‘indefinitely confined.’ The list goes on and on.”

Here is the commission’s takedown of that misinformation:

“Though she did not cite any specific sources, Representative Brandtjen appears to be conflating and misinterpreting several different types of data related to the voter registration list and multiple processes designed to ensure election integrity. Voter data mismatches happen about 5% of the time, and are almost always minor typos which are corrected by the clerk or the voter, not fraud. These voter records are never removed from the system – there are no “ghost voters” as Representative Brandtjen claimed in a related radio interview.

Janel needs to eliminate the Kool-Aid from her diet.

One of the loudest critics of how the election was run is Rep. Janel Brandtjen, chair of the Assembly elections committee. In a statement Monday, she said her committee will request additional materials to conduct a deeper review.

The type of probe Brandtjen describes mirrors a widely discredited re-examination being conducted by a private contractor in Arizona. Brandtjen and three other Wisconsin Republicans traveled to Arizona last month to observe that review. 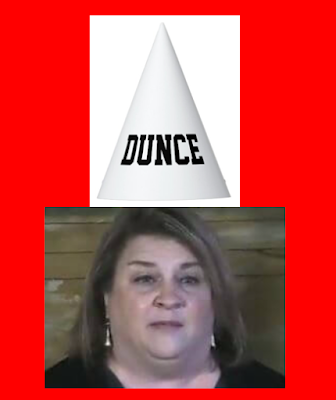 But Brandtjen said her real fear is what happens now that Evers has vetoed the restrictions on outside political money in Wisconsin.

“Right now, having third-party money as an option to place people in the clerk’s office, means to the highest bidder, we’re bidding-out the state’s elections,” Brandtjen said. “I think most people, both Republicans and Democrats, will say ‘No, I don’t want that.’”

With a tight budget and little help from the federal government, Chester County applied for an election grant from the Center for Tech and Civic Life, a previously small Chicago-based nonprofit that quickly amassed hundreds of millions of dollars in donations to help local election offices — most notably, $350 million from Facebook CEO Mark Zuckerberg and his wife, Priscilla Chan.

"Honestly, I don't know what we would have done without it," Turner said.

The coronavirus pandemic — and Congress' neglect — necessitated an unprecedented bailout of election offices with private money funneled through the little-known nonprofit. And the money proved indispensable.

Janel Brandtjen is one of the reasons why Chester County has flipped to blue.  Donald Trump is another. 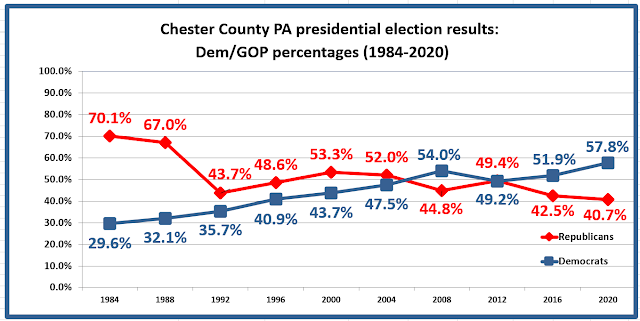 Wikipedia
Posted by Retiring Guy at 8:24 AM