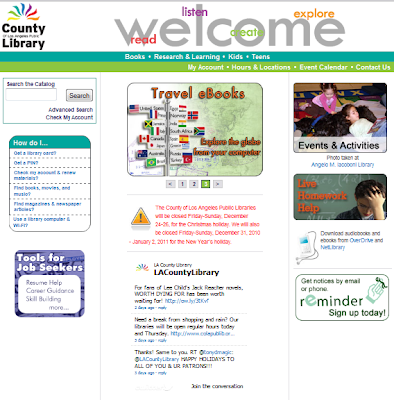 Excerpt: Los Angeles County's library system — one of the largest public libraries in the nation — is in financial distress and cannot sustain its level of services over the next decade, according to county library officials.

A proposed solution — increasing property taxes — seems to be getting a tough reception. The Library Commission's recommendation last week prompted no action by the Board of Supervisors.

Library officials have declined to be specific about what will be eliminated if a new tax isn't passed. But the size of the deficit — about $22 million a year over the next decade — may mean even deeper cuts into hours of operation and services that include homework help, children's story time and gang prevention efforts. The current budget is $160 million.

"It would have a significant impact on service delivery," the Library Commission concluded. The county library system serves 3.7 million people, including the residents of 51 of the 88 cities in L.A. County and most unincorporated communities. With 7.5 million volumes, the county library system boasts the third largest public library collection nationwide, behind only Boston's and New York's, according to the American Library Assn.