Not quite a done deal? 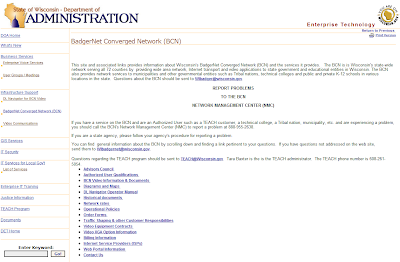 Excerpt: The Internet’s about to get a whole lot faster at the Beloit Public Library.

The library is one of six public libraries in the area along with two local school districts to be awarded federal stimulus funds aimed at improving their Internet access.

Wisconsin Gov. Jim Doyle’s Administration applied for and obtained $22.9 million in funds from the U.S. Department of Commerce, according to Robson’s press release.

“We were delighted when we found out the grant had been approved,” said Ruth Ann Montgomery, the director of the Arrowhead Library System that includes the Beloit, Clinton and Orfordville Public Libraries.

After the fiber installation is complete, all of these libraries will still pay $100 a month but for a 20- megabyte-per-second service, Montgomery said.

Caveat:  The $100 a month for 20-megabyte-per-second service is contingent upon the Wisconsin Department of Administration agreeing to extend the current BadgerNet contract through November 2016, which is a clear stipulation of the grant.  I'm not aware that DOA has taken this step yet.
Posted by Retiring Guy at 8:21 AM