GET ME REWRITE. In the works near Kenosha: More low-paying Amazon jobs that require getting used to work with robots


Amazon.com is in talks to take over another large industrial building along Interstate 94 in Wisconsin and create hundreds of jobs in the process, according to several real estate sources.  (Subscription required to access full article.)


I spoke with reporter Will Evans, who obtained records on injury rates from 23 Amazon fulfillment centers around the country. The data shows the rate of serious injuries at the Amazon warehouses is more than double the average for the industry. At some warehouses, it’s as much as six times higher. I asked him why.


Today, Amazon has more than 200,000 mobile robots working inside its warehouse network, alongside hundreds of thousands of human workers. This robot army has helped the company fulfill its ever-increasing promises of speedy deliveries to Amazon Prime customers.

This robotics race — led by Amazon — will have a seismic impact on the warehouse industry, which employs more than 1.1 million Americans today. And the rise of these artificially intelligent robots means there’s likely a day coming when these warehouse robots will be capable of replacing just about every human task, and human worker.


Taillon’s job is to enter a cage and tame Amazon’s wheeled warehouse robots for long enough to pick up a fallen toy or relieve a traffic jam. She straps on a light-up utility belt that works like a superhero’s force field, commanding the nearest robots to abruptly halt and the others to slow down or adjust their routes. “When you’re out there, and you can hear them moving around, but you can’t see them, it’s like, ‘Where are they going to come from?’,” she said. “It’s a little nerve-racking at first.” 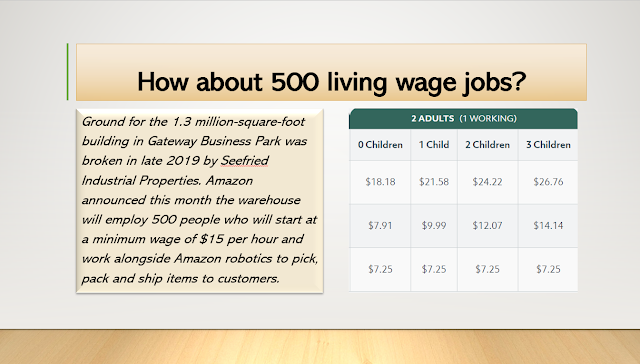 
One recent study shows $15 an hour isn't enough to secure affordable housing in most U.S. states. Nationally, someone would need to make $17.90 an hour to rent a one-bedroom apartment or $22.10 an hour to cover a two-bedroom home, according to analysis from the National Low Income Housing Coalition.

Renters across the country earn an average hourly rate of $16.88, the report estimated, showing that people earning well above the $15 level often struggle to afford housing. Those findings are based on the standard budgeting concept of spending a maximum of 30 percent of one's income on housing alone.