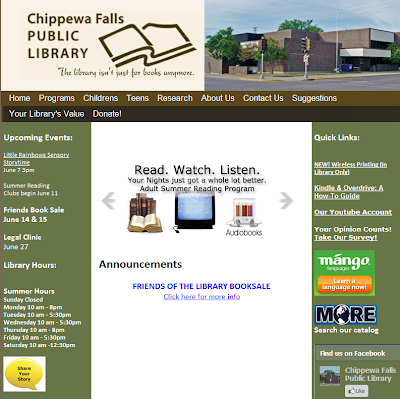 “I’m just looking forward to it,” she said of her new position.

Woods Roberts is a graduate of the University of Wisconsin-Madison, where she has a masters in library and information studies and a masters in art history.

She is in her seventh year as library director in Suttons Bay, Mich., about 80 miles due east of Green Bay.

Woods Roberts said she has experience at all levels of library work, including at a high school, college and public and private libraries. She has also worked in the private sector, in insurance and real estate.

Woods Roberts is married and has three children, including one who recently graduated with a master’s degree from University of South Dakota. (After earning an undergrad degree at MSU in 2010?)
Posted by Retiring Guy at 8:10 AM