Serena Nelson (no relation) served as the Director of the Southwest Wisconsin Library System for many years.

Her 40 years of commitment to historical preservation through reporting and researching on Mineral Point began with the 1956 purchase and subsequent restoration of the William T. Henry house and concluded with her initiating the 2008 project to save the sandstone curbstones of Henry Alley believed to date to the 1840s. Her efforts over the years were recognized that year by the Mineral Point Historical Society when she was inducted into the Gundry Legacy Society.  [See page 5.]

Early this year, failing health led to her being admitted to the Mineral Point Care Center where the quality of care, attention and concern given by the staff gave her - and us - much comfort in those final months.

We much appreciate her friends for their continuing kindness and support during that period. We are especially and forever indebted to her dear friends Peter Erbach and Carolyn Hunt, knowing they were with her so often when we couldn't be.

Mom was preceded in death by her daughter Ingrid in 1998 and her husband Mick in 2008. We, her surviving family, miss her so much but will always have the memory of her constant and unconditional love for us. 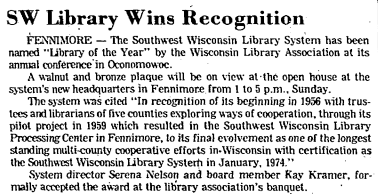