Look for this Book Soon @ a Madison-Area Library Near You

Sounds like some weird variation of re-gifting to me. 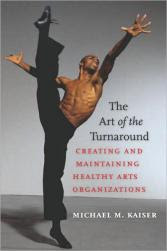 No copies in LINKcat (yet)
Link to October 13 CHANNEL3000.com article, "Ethical Questions Raised Over Book Given To Council Members. Union Members Loan Book On The Arts". (Thanks, Tony!)

Excerpt: Common Council and committee members received a book concerning the importance of the arts during a time they're making critical decisions on one of the city's premier art venues.

"No one wants to lose Overture, but are we capable of making a success out of it? I don't believe we are," said Alder Judy Compton.

Compton said she was incredulous when she found the book, "The Art of the Turnaround: Creating and Maintaining Healthy Arts Organizations," in her council mailbox. The Michael Kaiser book profiles five performing arts operations rescued from failure. It arrived at a time when the council is being asked to consider buying the struggling Overture Center for $1.

As a rule, council members can't receive anything of value. But the local stagehands union that purchased the books for the entire council and members of the Overture ad hoc committee said the books aren't a gift, but a loan. They said the books are to be returned to the union. They will then be donated to the Madison libraries or other libraries if there is no need for so many copies.
Posted by Retiring Guy at 7:53 PM