Shooting at Planned Parenthood Adds to Challenges for Congress.  (The New York Times, 11/29/2015)


Even as the authorities say they remain uncertain what precisely led a gunman to attack a Planned Parenthood facility in Colorado Springs on Friday, a comment attributed to the suspect by a senior law enforcement official — “no more baby parts” — fed directly into an already high-pitched controversy over Planned Parenthood and its practices.

The phrase was an eerie echo of language used by politicians here and in many state capitals since an anti-abortion group began releasing its undercover videos of Planned Parenthood officials discussing possible donations of fetal tissue for medical research.  [emphasis added} 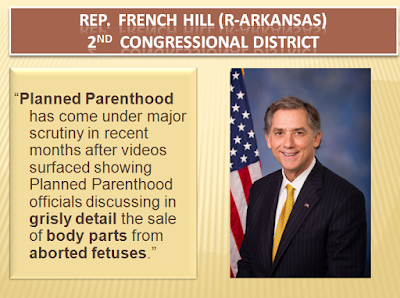 Other Hill posts:
Meet the members of the Republican Study Committee.  (7/2/2015)