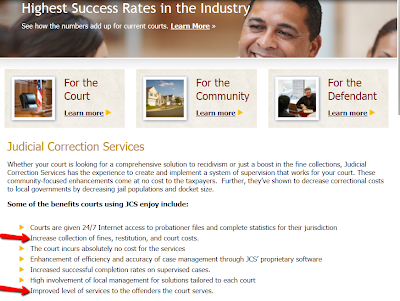 Example of "improved level of services to the offenders the court serves":  ﻿   Here in Childersburg, where there is no public transportation, Ms. Ray has plenty of company in her plight. Richard Garrett has spent a total of 24 months in jail and owes $10,000, all for traffic and license violations that began a decade ago. A onetime employee of United States Steel, Mr. Garrett is suffering from health difficulties and is without work. William M. Dawson, a Birmingham lawyer and Democratic Party activist, has filed a lawsuit for Mr. Garrett and others against the local authorities and the probation company, Judicial Correction Services, which is based in Georgia.

“The Supreme Court has made clear that it is unconstitutional to jail people just because they can’t pay a fine,” Mr. Dawson said in an interview. 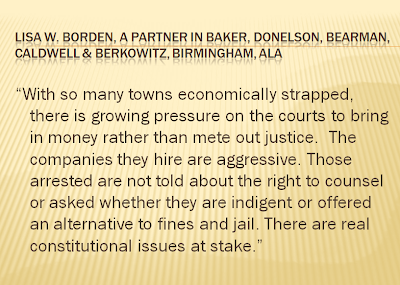 And here's another example from the Times article about how these local hires do their jobs.

For that driving offense, Ms. Ray has been locked up three times for a total of 40 days and owes $3,170, much of it to the probation company.

Let's call this thing exactly what it is.

Related post:
A lesson in privatization:  Welcome to Hallandale Beach Florida and the world of aquatic risk management.   (7/5/2012)
Posted by Retiring Guy at 4:16 PM