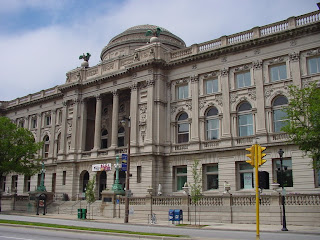 Excerpt: Here's the plot so far: Over its 131-year history, the library has developed a network of 12 neighborhood libraries, only a few miles from one another and from the Central Library downtown. Generations of Milwaukee residents have grown up with libraries within walking distance, a popular public service even as the libraries' emphasis has shifted from books to computers.

But now the city has fallen on hard times, beset by falling property values, rising benefit costs and stagnant state aid. Since 2000, the library's budget has been cut 20%, adjusted for inflation. And seven aging neighborhood libraries need new heating and cooling systems, at a cost of $750,000 each, or nearly $5.3 million total.

Yet any discussion of closing libraries has been ended by furious public opposition.

Now the Library Board is pondering options that would rebuild the citywide library system, combining some libraries with each other or with other facilities and creating as many as three new types of libraries. All of those plans would take several years to implement.
Posted by Retiring Guy at 9:22 AM