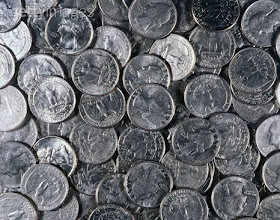 Link to September 5 Greenfield Recorder article, "Donations pour in from all quarters: Greenfield library theft prompts DJ to call on supporters; fund replenished within the day".

Excerpt: A day after the public library announced that someone had taken 21 pounds of quarters it had been collecting in a one-gallon glass cider jug since mid-January, a local radio personality has helped to replace the missing cash.

On the same morning the story appeared in The Recorder, Chris 'Monte' Belmonte, program director at WRSI The River at 93.9 FM, put a call out on his radio show to listeners, asking them to donate their quarters.

The Friends of the Library had begun collecting the quarters on Jan. 11 as part of the library's 100th birthday celebration.