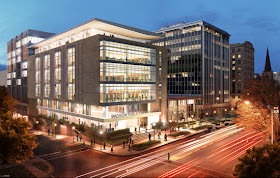 Excerpt: Convinced the timing and price are right, Mayor Dave Cieslewicz is proposing to move forward with a new $37 million central library, the biggest city building project since Monona Terrace opened 12 years ago.

“It’s in the best long-run interests of the city,” Cieslewicz said, citing the need, favorable construction costs, jobs and increased property values. “Now is the time to build the library.”

Cieslewicz on Tuesday will formally propose in his capital budget that the city use $37 million in borrowing, tax credits and private fundraising over the next three years to pursue a proposal by the Fiore Cos. for a six-story, glass and stone library at West Washington Avenue and Henry Street that would be part of a larger, more ambitious redevelopment.
Retiring Guy at 8:57 AM