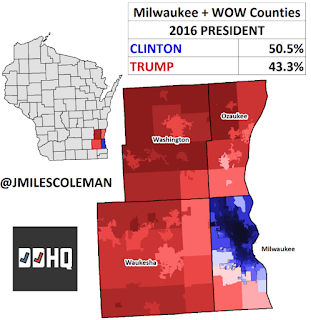 
“It isn’t that the Republican Party is withering away in the WOW counties; it was that they weren’t particularly thrilled with Trump and they showed it by not voting for him,” said Charles Franklin, director of the Marquette Law School poll. “Trump still struggles to get more than 40 percent approval, even in the WOW counties. It really is an open question about whether Republicans have come back to him here.”


Let's take a look at the numbers.

Even in Washington County, Wisconsin's reddest of red, Trump received 3,025 fewer votes in 2016 than Romney did in 2012 -- a drop of 5.5%.  Clinton, however, was unable to make any Democratic headway here.

Clearly, the WOW counties are red, but not totally into that Trump's America thing.  This will again be a factor in the 2020 presidential election.

Related series of posts:
Red but not totally into that Trump's America thing.
Posted by Retiring Guy at 8:43 AM