"Baby, It's Cold Outside" and the Training Wheels Factor (side 1, track 5)


Marcie spends all of her evenings at home, waiting for the phone to ring.  Which results in this note from a friend. 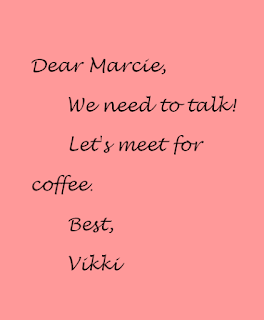 The song was written by Hank Hoffman and Gary Klein.


“Baby, It’s Cold Outside” had humble origins. The composer Frank Loesser, known for “Guys and Dolls” and other Broadway hits, wrote it in 1944 for himself and his wife Lynn Loesser to perform for friends in their living rooms.

On their original score, the parts were labeled “Wolf” and “Mouse.” But the couple performed it as a flirtatious song, said their daughter, Susan Loesser, 74. “In those days, in the entertainment business, you had to bring an act to parties,” she added. “This was their act.”

In an unfinished memoir, her mother recalled performing the song at one such party. “Well, the room just fell apart,” Lynn wrote. “We had to do it over and over again and we became instant parlor room stars. We got invited to all the best parties for years on the basis of ‘Baby.’ It was our ticket to caviar and truffles.”


What Joanie wants in addition to Johnny getting angry:
The songwriting credit goes to Hal David -- yes, THAT Hal David -- and Sherman Edwards, who is best known for the muscial 1776.

And yet the songwriting credit goes to 5 guys, due to some French influence:

Life's not worth living when it not him on the phone.


"Make it your reason for living."

The lyrics also provide advice as to how determine his mood when he returns home from work.  Or wherever.

Labels: Baby It's Cold Outside, Bobbi Martin, Bobby's Girl, For the Love of Him, I Will Follow Him, It Must Be Him, Joanie Sommers, Johnny Get Angry, Little Peggy March, Marcie Blane, Vikki Carr