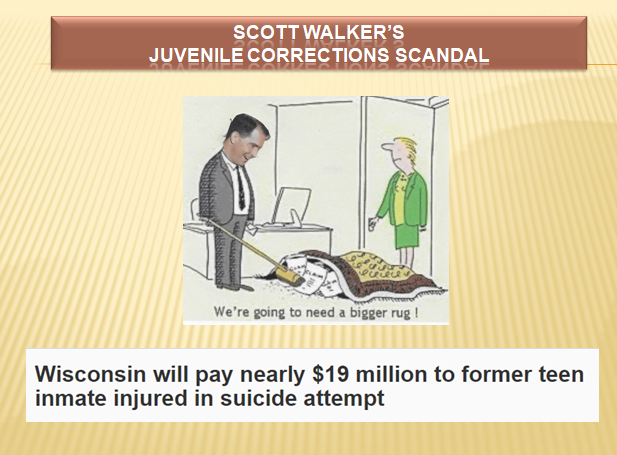 From the 3/20/2018 Milwaukee Journal Sentinel article:


$19 million and counting. The state agreed Tuesday to pay $18.9 million to a former teen inmate who was severely brain damaged after a failed suicide attempt at the state's problem-ravaged juvenile prison.

The girl's attorney, Eric Haag, described it as the largest civil rights settlement the state has ever reached. With other inmate lawsuits pending, Wisconsin taxpayers could be on the hook for further payouts.


And this is what Scott Walker THINKS he's running on!

The Wisconsin Senate voted Tuesday to give Wisconsin residents a one-weekend sales tax holiday in addition to a one-time $100-per-child tax rebate, giving Gov. Scott Walker a $133 million package that he had been counting on for his re-election campaign.

The total number of family households with children declined by 2.7 percent between 2000 and 2010.