UPDATE. The only opponent quoted in the article is a WMC lobbyist who once served as an intern for current Assembly Speaker Robin Vos 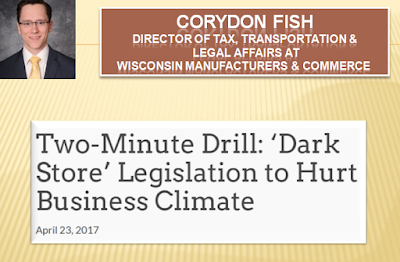 Corydon is paid to lobby against closing the dark store tax loophole.

Reference to Corydon connection to Vos is found here.

In spite of bipartisan support for closing the loophole.


Here’s how Dark Store tax scheme works. Big Box retailers have a developed the “Dark Store Theory” to lower the value of their commercial property and shift their property tax burden onto local homeowners. Using the Dark Store theory, corporate tax lawyers argue that new, fully operational Big Box stores be assessed at the same value as the empty, abandoned store they have left behind.

The corporate attorneys then seek massive property tax refunds from municipalities and threaten to sue if their request is rejected. They know that the deep pockets of the Big Box chains can extend a lawsuit for years and pressure the municipalities to settle for far less than the Big Box chain would pay under normal circumstances. This increases property taxes for homeowners, often by hundreds of dollars a year.


Their master's voice.  A more likely reason is Vos and Fitzgerald are caving in to powerful special interests that oppose the bills, led by Wisconsin Manufacturers & Commerce (WMC), the state’s largest business group. WMC secretly raised and spent about $32.7 million between January 2006 and December 2017 on outside electioneering activities in legislative and statewide races to support conservative and Republican candidate.