School choice commute. (As Not Crazy Eddie sez, IT'S INSANE!!!!) 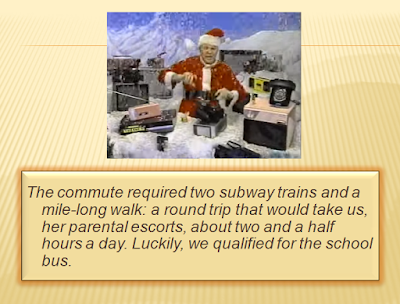 
Those drives may be about to get longer: Donald J. Trump’s pick for education secretary, Betsy DeVos, is a proponent of vouchers and charter schools, and more school choice means more busing. Will schools, which are paying greater attention to bullying in their hallways, enforce these policies on the road as well?


Watch it for yourself.


Mr. Antar, who was born on Dec. 18, 1947, grew his business from a single Brooklyn store, founded in 1969, into the largest consumer electronics chain in the New York metropolitan area, fueled in large part by the spread of the VCR. At its peak, the chain had 43 stores, with locations as far north as Boston and as far south as Philadelphia.

As it expanded, Crazy Eddie also became famous for a memorable series of commercials starring an exuberant, fast-talking man many falsely believed to be Mr. Antar himself.

The real star, a radio disc jockey named Jerry Carroll, performed in more than 7,500 radio and television commercials that ran for nearly 14 years, starting in 1975.