GET ME REWRITE: Donald Trump pet, Ron DeSantis, stretches the leash on climate change to the breaking point 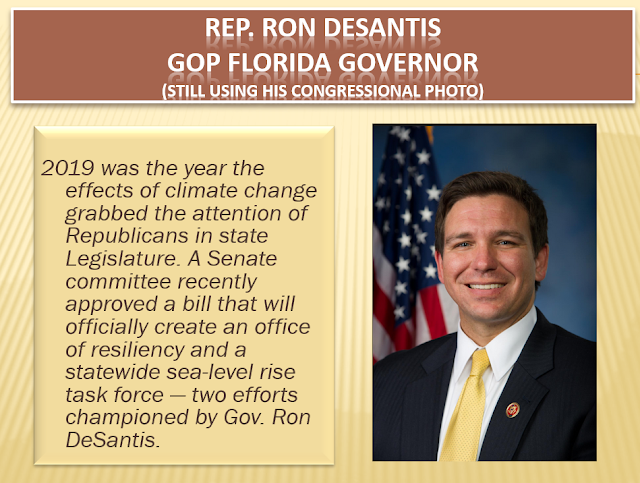 
Gov. DeSantis goes bold on climate change. Even Rick Scott says it’s real. Now what? | EditorialThe new positions represent a watershed moment in a state with more to lose than any other. It feels like that moment in the Wizard of Oz, where the movie turns from black-and-white to color. That both offices will be housed in the governor's suite — and report directly to DeSantis — sends a serious message.

With the exception of House Speaker José Oliva, Florida's Republican leaders no longer deny the reality of climate change, which every major scientific organization recognizes is real, is exacerbated by human activity and poses an existential threat.


In South Florida, which takes rising sea levels seriously enough to form a regional compact to deal with global warming, climate change is no abstract issue. By 2100, sea levels could swell high enough to submerge 12.5 percent of Florida’s homes. These so-called king tides, which happen frequently, are the most blatant example of the interplay between rising seas and the alignment of the moon, sun and Earth. Even without a drop of rain, some places flood routinely.

Reminds me of KING TIDE. https://youtu.be/vd90UZ-0abE