Mark Honadel: No longer around to pick up the pieces


Honadel resigned from the Wisconsin State Assembly in 2013 to take an undisclosed job in the private sector, which you can now find out about at his LinkedIn profile. 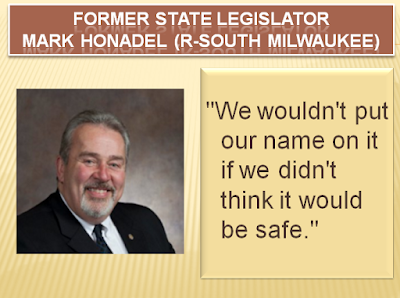 
One of the proposal's lead sponsor's, Rep. Mark Honadel (R-South Milwaukee), said that the mine could bring many hundreds of jobs to northern Wisconsin as well as Milwaukee-area manufacturers of mining equipment and parts, such as Joy Global Inc., Monarch Corp., Super Steel Corp. and Caterpillar Inc., which purchased South Milwaukee-based mining equipment maker Bucyrus International in 2011. Honadel said the legislation could accomplish all that while protecting a region rich in streams and wetlands. [emphasis added]

Last week, Joy said it was cutting 26 salaried jobs at its surface mining equipment facility on National Ave. Earlier in October, the company said it was laying off 113 people at the National Ave. plant, adding to the hundreds of people already on layoff at Joy and its primary competitor, Caterpillar Inc.  [emphasis added]