Dear Scott Walker, While wreaking havoc, keep in mind that the Presidential executive order is not a Barack Obama invention.


Your hero issued one every 7.7 days, on average, compared to every 11.1 days for President Obama. 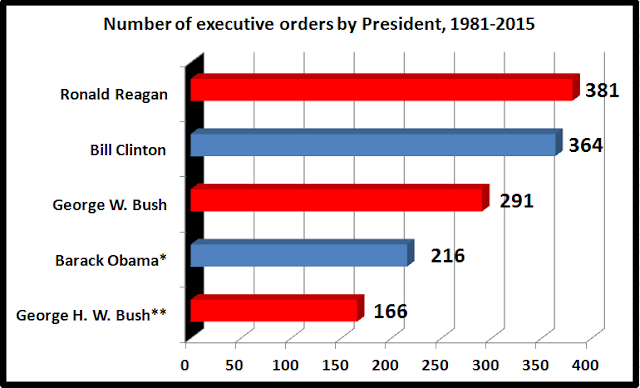 
Moving forward from the Eureka speech, Walker will unveil a new "day one promise" every week — things like ending Obama's executive actions, an action he can take without the help of Congress.


More wreaking havoc:
Scott Walker, the undoer.  (9/8/2015)
Scott Walker's growing list of things worth considering: U.S.-Canada border wall, wreaking havoc in Washington, tougher penalties for WEDC fraud.  (/8/2015)
On Thursday, look for Scott Walker to wreak more havoc on his Presidential campaign.  (9/7/2015)
After Donald Trump wreaks havoc on Scott Walker's campaign, Walker decides this would be fun to do elsewhere.  (9/3/2015)
Posted by Retiring Guy at 7:31 AM