Reading Lynn Anderson's obituary and thinking about the Vietnam War


Ms. Anderson attributed the song’s popularity to its emotional tug as the nation was trying to recover from the war in Vietnam. “This song stated that you can make something out of nothing,” she told The Associated Press. “You take it and go ahead.”


As I read this section of Lynn's obituary, I immediately asked myself two questions:

In answer to the first question, my memory tells me we were just trying to put the war behind us in early 1971.  The heyday of the anti-war protests was over, and the killings at Kent State and Jackson State in May 1970 subsequently created a different mood on many college campuses, amplified by the heavy, deadening note of the Sterling Hall bombing on August 24.  That was certainly the case at UB, where anti-war protests and related activities were a prominent feature of campus life during my freshman and sophomore years.  From the first week of my junior year, it was as though the light of resistance had been turned off.

As for the fatal casualties, the numbers were clearly on the decline. 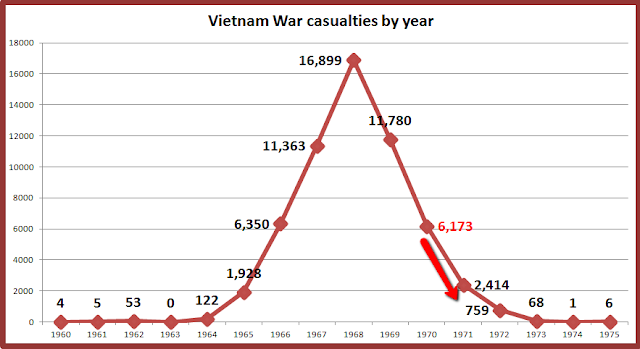 But officially, there were still 2+ years of the war remaining.