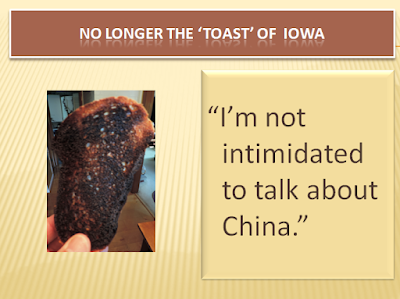 As quoted in Scott Walker talks tough on China while campaigning in Iowa.  (Madison.com, 8/26/2015)


The tough words come as Walker is trying to show more spark to energize his presidential campaign. They also come after Walker had previously praised Chinese President Xi Jinping following a trade mission Walker led to China in 2013 designed to increase Wisconsin exports to the country.

Walker said at the Iowa Agriculture Summit in March that he was honored to have met with the Chinese leader along with Iowa Gov. Terry Branstad, noting that they were two of the first American elected officials to have such a meeting.