Scott Walker: Not in his own words 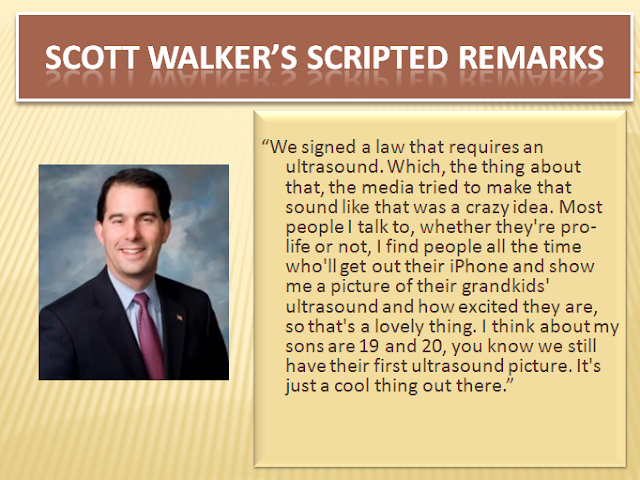 As quoted in Scott Walker, discussing abortion, says ultrasounds are “just a cool thing out there”.  (Washington Post, 5/28/2015)

Walker not alone in preferring his remarks tightly scripted.


Rick Perry’s voice softens when he talks about the joy he gets from looking at his iPad and seeing “that 20-week picture of my first grandbaby.” Marco Rubio says ultrasounds of his sons and daughters reinforced how “they were children — and they were our children.” Rand Paul recalls watching fetuses suck their thumbs. And Chris Christie says the ultrasound of his first daughter changed his views on abortion.


If they seem to be reading from the same script, they are.

The woman who's whispering words into the ears of the Republican presidential candidates.

Related posts:
Get me rewrite: Scott Walker plans to sign into law essential plank of his presidential platform.  (7/10/2015)
On abortion, Scott Walker aligns his views with Americans United for Life.  (3/4/2015)
Posted by Retiring Guy at 11:50 AM