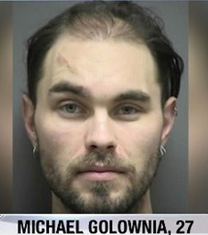 Alleged drunken, but certifiably crazy driver.
Police found 44 grams -- about an ounce and a half -- of marijuana in Golownia's car, as well as "evidence of narcotics delivery".