But not likely in our lifetimes.  (This outcome can't be blamed on Jim Doyle.)

There's probably a makers vs. takers discussion in here somewhere.


Nearly 1.7 million, or three out of five calls, to the state's automated unemployment hotline were blocked last year because the system was too busy handling other calls, according to an audit released Tuesday.

Also, the Department of Workforce Development overpaid $167.9 million in unemployment claims over the past three years, the Legislative Audit Bureau report found. 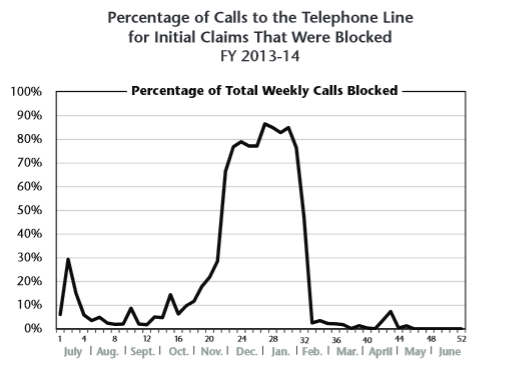 Related posts:
Wisconsin DNR mine permitting rules faulty; Republican outrage to follow. (12/16 /2014)
Government Accountability Board audit: Republicans trot out press statements they've had in the can for months.  (12/16/2014)
Posted by Retiring Guy at 12:53 PM