The Duprees: A Guilty Pleasure in 1963 Remains One Today 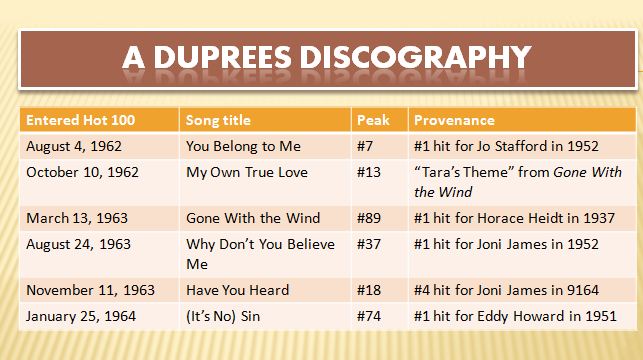 Another group of Jersey boys.  The original Duprees, a vocal quintet, hailed from Jersey City.  The members included....

I have to admit that I haven't listened to their music as a whole.  But still, they were a fine, yet totally underrated group, whose recorded legacy indicates that they were far more versatile than their early more successful issues showed. When listened to as a whole, their library of recordings from 1962 to 1975 clearly demonstrates that they were easily the equals of many of their more commercially successful contemporaries.

Based on this evidence, the Duprees decided to experiement on a "Philly" sound by the mid-70s.

On the outside looking in.  With the 50th anniversary of “You Belong to Me” approaching, Salvato and Bialoglow should be enjoying renewed recognition. But while the hit musical “Jersey Boys” put the Four Seasons, from Newark, back in the spotlight, they feel like forgotten outsiders even as the current lineup of the Duprees continues to do well, playing almost 100 dates a year. Neither original member is legally allowed to use the name Duprees

The current version of the Duprees is a quartet.  The tour dates through December 2015 features concerts in New Jersey, New York, Pennsylvania, Maryland, and Florida.