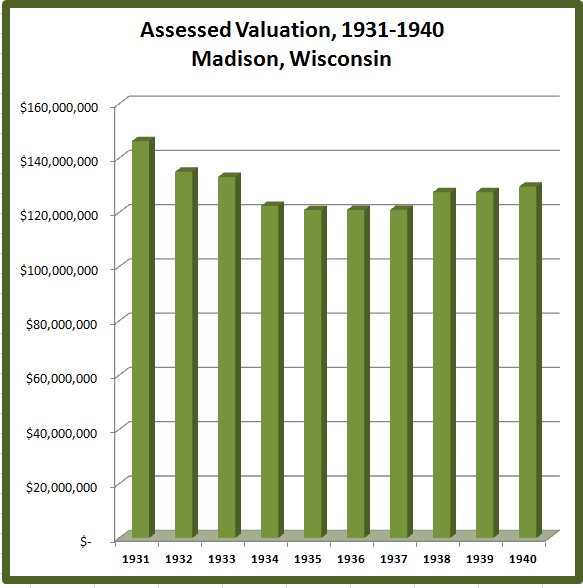 It wouldn't be until after World War II when Madison reached pre-Depression levels in assessed property values.

Abstract:   Using new data on market‐based transactions we construct real estate price indexes for Manhattan between 1920 and 1939. During the 1920s prices reached their highest level in the third quarter of 1929 before falling by 67% at the end of 1932 and hovering around that value for most of the Great Depression. The value of high‐end properties strongly co‐moved with the stock market between 1929 and 1932. A typical property bought in 1920 would have retained only 56% of its initial value in nominal terms two decades later.

There was a big decline in house prices during the Great Depression and a large increase in mortgage foreclosure rates. To that extent, it’s exactly the same phenomenon. However, the cause of the housing distress during the Great Depression—the rise of foreclosures, the number of homes with delinquent mortgages and so forth, was the depression itself—the falling incomes, the collapsing price levels. That caused the distress in housing markets. Today, distress in the housing market is largely caused by the housing market itself—the boom and the bust, which has been centered, of course, on the subprime market. So, there is a real difference between the 1930s and today.