Excerpt: Jobs. Thousands of jobs for southeastern Wisconsin, That’s what those marks above symbolize. They’re real jobs — an estimated 3,356 casino jobs and another 1,400 temporary construction jobs that would come to our corner of the state if Gov. Scott Walker approves the plans by the Menominee tribe to build an $808 million Kenosha casino. 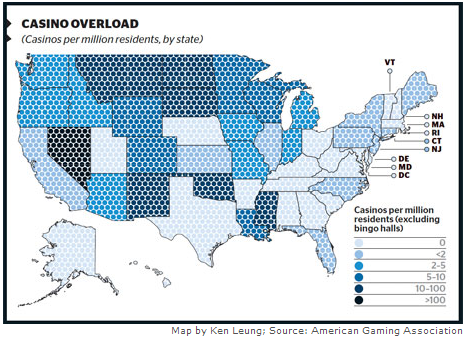 Excerpt:  For all the jobs generated by 12 casinos, Atlantic City has a poverty rate of 29%. That’s in a business friendly State, with lower taxes, and generally warmer and better climate year-round. Unemployment is currently 15.3% as of July according to U.S. Bureau of Labor Statistics.


Excerpt:   But the casinos also lead to a plethora of social ills, including increased substance abuse, mental illness and suicide, violent crime, auto theft and larceny, and bankruptcy. The latter three all increased by 10 percent in communities that allowed gambling.

Excerpt:   While the state of Mississippi opened casinos and built riverboats, Alabama built automobile plants – Mercedes, Honda, Hyundai, the Toyota engine plant – a rocket plant in Decatur, aviation and aircraft maintenance in South Alabama, not to mention catfish farms throughout the Black Belt and biotechnology in North Alabama. Those industries create things, they employ people for good wages and they come with a network of smaller support businesses that also employ people. To put it in old fashioned terms, they grow the local economy.  (Real jobs, in other words?)

And then there's Mother Nature to contend with.

Related post:
Journal-Times Editorial Board Salivates Over Low-Paying Casino Jobs.  (8/29/2013)
Posted by Retiring Guy at 6:36 AM