Perhaps He Feels He Can Afford to be Stupid 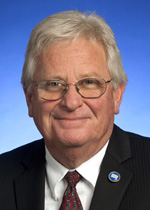 In the Event of a Terrorist Attack Affecting the Election, Who Decides Whether to Delay?What the Constitution and Federal Statutes Say.  (FindLaw, 7/21/2004)

As Michael C. Dorf points out, it's not the Presdent's call.

But tinkering with the laws of each state -- or with federal law governing state procedures - may not prove sufficient. The decision whether to postpone a federal election in one state affects the nation as a whole.
Posted by Retiring Guy at 7:22 PM