Excerpt:   Molly Fogarty, the city’s director of libraries, and Stephen Cary, chairman of the Library Commission, said they knew budget cuts were coming, but hoped for the best. The city budget recommended by Mayor Domenic J. Sarno currently calls for 12 layoffs in the city and the elimination of 96 vacant positions, which includes three layoffs in the libraries and four unfilled vacancies. 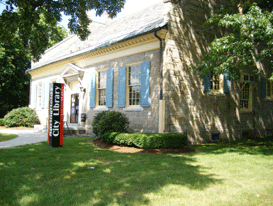 “We are hoping this is not permanent,” Fogarty said. “We certainly regret having to close any libraries. I feel the city is a city of neighborhoods and every neighborhood cherishes its library. The idea right now is we just don’t have the staff.”

Springfield, Massachusetts, is my mother's hometown.  The "City of Homes" ain't what it ued to be.  In the 1930s, Mom and her three sisters would walk from Hartford Terrace to the Forest Park Branch Library, one of Springfield Carnegie libraries, on a regular basis.