Excerpt:  The decision will leave New Orleans as the most prominent American city without a newspaper that is printed every day. But it also reflects the declining lure of the paper as a printed product. In 2005, before Katrina struck, the paper had a daily circulation of 261,000; in March of this year, the circulation was 132,000.

The developments were the latest instance of reorganization in a rapidly changing industry, which continues to struggle with declining advertising revenue and the changing preferences of readers for online news outlets. Data tracked by the Audit Bureau of Circulations showed that papers with a circulation of 25,000 or more had a 21 percent drop in circulation between 2007 and 2012. 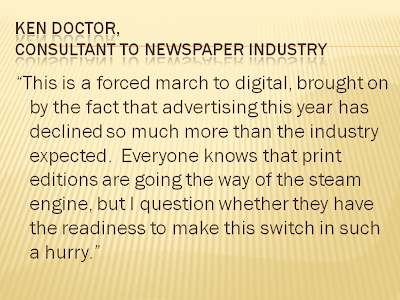