Excerpt:   In 2010 the four communities approved the expansion of the existing North Shore Library at its present location, 6800 N. Port Washington Road. The library, crowded and in need of additional space, would expand into additional space on the first and second floor of the four-story building. 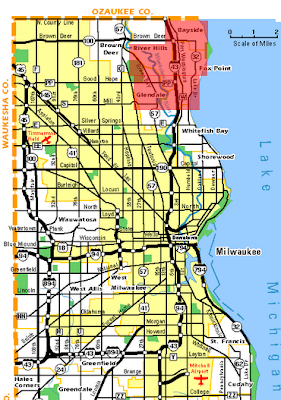 Glendale owns the first floor space where the library is currently housed and since 1984 when it opened, the four communities have paid a dollar a year under a 50-year lease to rent the space from the city. The city gained ownership of the space as part of tax-incremental financing agreement that led to the construction of the building as well as the nearby Coventry Apartments.

Reaction of Glendale Mayor Jerry Tepper:  "I don't think I would like to see the city donate the cost of the existing space without it counting toward the cost of its share."

One more item of interest.

History of the North Shore Library.
About the Whitefish Bay Public Library.
Posted by Retiring Guy at 7:31 AM