"The Other America" and the War on Poverty 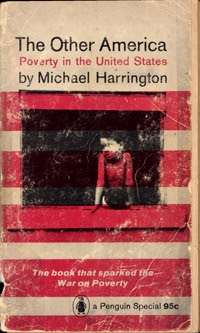 Excerpt:    Lyndon Johnson, a seasoned New Dealer from Texas who ascended to the presidency after Kennedy’s death, wasted little time in making poverty a national issue. Invoking Kennedy’s memory, he launched his War on Poverty on January 8, 1964. The Economic Opportunity Act that Johnson sent to Congress reflected his broad-ranging approach to alleviating poverty in rural and urban areas. The legislation addressed poverty on many fronts:

• It proposed a Job Corps and work training and work-study programs to help poor youths complete their educations and develop skills;

• Boosted community development with a Community Action Program based on “maximum feasible participation” to give American communities the opportunity to develop their own comprehensive plans to fight local poverty;

• Set up Volunteers in Service to America (VISTA), a domestic Peace Corps program to recruit volunteers to counter poverty;

• Proposed a loan program as an incentive for those who hired the unemployed. Congress, at Johnson’s behest, created the Office of Economic Opportunity (OEO) to coordinate the War on Poverty, leaving a legacy of positive government activity that included Head Start for disadvantaged school children, food stamps, Medicare, and Medicaid.
Posted by Retiring Guy at 6:37 PM

Labels: Michael Harrington, The Other America, War on poverty