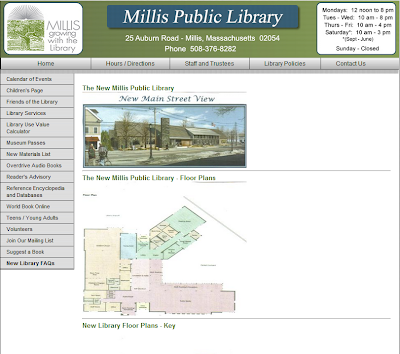 Excerpt: More than 10 years in the making, the new Millis Public Library is about to become a reality.

With construction slated to begin later this month on the $7.8 million project, the library’s board of trustees is hosting a groundbreaking ceremony Saturday morning at the site of the new building, a vacant lot at Exchange and Main streets.

State Representative David Linsky will speak, and representatives of the Massachusetts Board of Library Commissioners, the state agency that oversees and supports public libraries, will also be present.

“We have come a long way from people thinking libraries are just a warehouse for books,’’ said Beverly Temple, chairwoman of the Millis library board. The new library is being thought of as a community center, she said. “ ‘The town’s living room’ sort of became its tagline.’’

The current Millis Public Library, built on Auburn Road in the late 1960s, is filled to capacity. Books line the top shelves of nearly every stack. The young adult section is composed of two beanbag chairs squeezed behind the stacks in an upstairs loft. Five staffers share one small office. And children’s story time, held three times per week, takes place between another set of collection stacks.

The library’s single meeting room accommodates 15 to 20 people comfortably, which recently proved to be a challenge when 75 youngsters and their parents showed up for a talk by “Diary of a Wimpy Kid’’ author Jeff Kinney. A leaky roof left the room mold-filled and unusable for most of last winter.
Posted by Retiring Guy at 9:37 AM