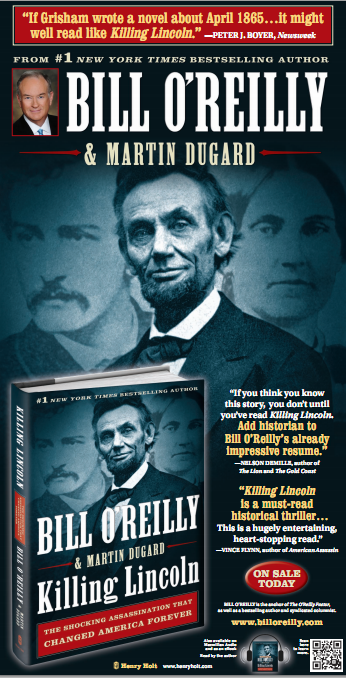 Excerpt: O’Reilly, now 62, says Americans are ill equipped to make wise decisions (“History in the public-school system now? Forget it”) in choosing their leaders, and that a dose of Lincoln—“the gold standard of leadership”—may help. But he has not gone suddenly egghead. Killing Lincoln is not a work of original scholarship or of breakthrough insight; it is meant to be a page-turner, modeled after the thrillers of John Grisham. “That’s the kind of books I like,” he says.

He mostly succeeds in that regard, in the sense that if Grisham wrote a novel about April 1865—a tiny span densely packed with history, from Appomattox to the Lincoln assassination and the hunting down of John Wilkes Booth—it might well read like Killing Lincoln. O’Reilly and Dugard collaborated on the project via email and telephone and wrote it in six months. If it sells, O’Reilly says, he plans a series of such books.

A page-turner a la Grisham.

Peter, are you saying O'Reilly wrote a work of fiction?  Or is it a case of damning with faint praise?

The deputy superintendent of Ford’s Theatre National Historic Site seems to think it's the former.
Posted by Retiring Guy at 9:18 AM