Though many public libraries still have his books available.  (1 of 10 in LINKcat.) 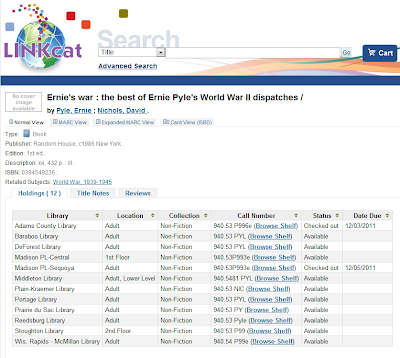 Some Artifacts Are Gone, but Not Pride in a War Correspondent Who Mattered. (The New York Times, 11/10/2011)

Excerpt: Dana is learning the familiar lesson that the famous are not forever so; names slip from collective memory, to be replaced by other names also destined for the tip of our tongues, and then gone. Who remembers, say, Wheeler and Woolsey, the wacky comedy team of the 1930s;


or Irvin S. Cobb, a cigar-chomping humorist as well known as Will Rogers in his day; 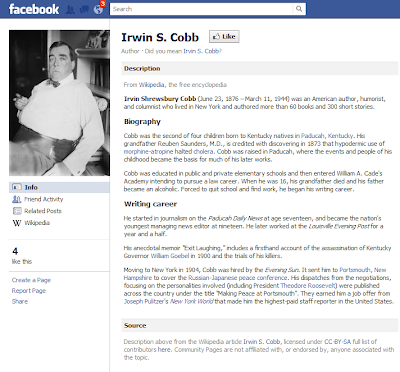 OK, who isn't on Facebook nowadays.
or the Dionne quintuplets, international sensations.


But Ernie Pyle was not just famous; he mattered.

Pyle was a slight man of uncommon empathy who gained some fame as a roving national columnist for the Scripps Howard news service. His popularity then skyrocketed during World War II, thanks to plainly worded dispatches from overseas that put readers in the mud beside exhausted, homesick G.I.’s, bracing for the next burst of combat.
Posted by Retiring Guy at 3:22 PM